Abbie Cornish as Bess; lady to Elizabeth I in “Elizabeth: The Golden Age” (2007)

16 APRIL 1565: The BIRTH of Elizabeth “Bess” Throckmorton, Lady Raleigh (16 April 1565 – 1647) was a lady-in-waiting to Elizabeth I. Bess is said to have been intelligent, forthright, passionate and courageous. Elizabeth Throckmorton would have been a striking person in any age, including our own. She stands alongside Bess of Hardwick, a contemporary, and Lady Anne Clifford, a little later, as an example of the woman who overcomes all the considerable odds stacked against her.

Elizabeth’s family had deep rooted connections at court that started centuries before her birth. Elizabeth was the youngest child and only daughter of Sir Nicholas Throckmorton and his wife Anne Carew. Nicholas was the son of Sir George of Coughton Court and Katherine Vaux. The Throckmortons had been at court since the early reign of King Henry IV. Elizabeth’s great-great-grandfather, Sir Thomas Throckmorton, was High Sheriff of Warwick and Leicester counties during Henry’s reign. Nicholas’s mother, Katherine, just happened to be the uterine sister of Sir Thomas Parr, father of the future Queen Katherine. A uterine sibling meant that Sir Thomas and Lady Throckmorton shared the same mother, Elizabeth FitzHugh. Elizabeth was a daughter of Henry, Lord FitzHugh and Lady Alice [born Neville]. As the daughter of a Neville, there is no need to explain the Neville connections to the crown. I will simply note that they were descended from the Beaufort children of Prince John of Gaunt, 1st Duke of Lancaster and his third wife, Katherine Swynford. Elizabeth FitzHugh was at court as Lady Parr until her husband died in 1483. Sir William Parr was a staunch supporter of the House of York and had been a close confidant of King Edward IV. However, once the Duke of Gloucester took the throne as Richard III, Parr declined any involvement in Richard’s coronation and reign. Lord Parr headed north where he died shortly after. His widow, Elizabeth, would marry again sometime before or shortly after Henry Tudor took the throne as King Henry VII. The new husband was a staunch Lancastrian. Nicholas Vaux’s mother had served Margaret of Anjou. Nicholas was a protege of Lady Margaret Beaufort, mother of the new King. And this, my friends, was how it was played at court. Alignment with the right people and monarch on the throne made life comfortable for everyone involved. Elizabeth, now Lady Vaux, had three daughters by her second husband, Nicholas [later Baron Vaux of Harrowden].

Elizabeth Throckmorton’s father, Lord Nicholas, later a diplomat, served in the household of Henry Fitzroy, Duke of Richmond as a page. The position is thought to have been attained by his uncle, Sir William Parr [later Baron Parr of Horton], in 1532. Sir William had been appointed Chamberlain of the household of the illegitimate son of King Henry VIII. Nicholas’s cousin, also named William, was present in Richmond’s household as a companion. William learned and played alongside Richmond and another companion, the Earl of Surrey [Henry Howard]. Nicholas ventured with Fitzroy as he traveled to France to meet King Francis. He stayed on for about a year and became somewhat fluent in French. After Fitzroy’s death in 1536, Nicholas’s options were somewhat limited. His mother, Katherine, used her influence as an aunt to obtain him a position in the household of his cousin, Lord William Parr [created Earl of Essex in December 1543]. In July 1543, his cousin Katherine Parr, was married to King Henry VIII as his sixth queen. By 1544-47 or 8, Nicholas had been appointed to the Queen’s household as a sewer. Nicholas would go on to serve under the rest of the Tudor monarchs; Edward VI, Mary I, and Elizabeth I.

Elizabeth’s mother, Anne Carew, was the daughter of Sir Nicholas Carew and Elizabeth Bryan. Lady Bryan married Sir Thomas Bryan and was governess to all three of Henry VIII’s children at one point in time. Lady Bryan was the daughter of Elizabeth Tilney by her first marriage to Sir Humphrey Bourchier. By her mother’s second marriage to Thomas Howard, Earl of Surrey [later Duke of Norfolk], Lady Bryan was an aunt of Queen Anne Boleyn and Queen Katherine Howard. Anne Carew’s father, Nicholas, was a grandson of Eleanor Hoo. Eleanor was sister to Sir Thomas Boleyn’s [father of Queen Anne Boleyn] grandmother, Anne Hoo. Courtiers, by this time, had started to close the gap between the affinity to each other, meaning most of the court was related to each other. One way or another.

Elizabeth was only six when her father died. In 1584, she went to court and became a lady-in-waiting to the Queen. She eventually became a gentlewoman of the Privy Chamber (she dressed and undressed Elizabeth). 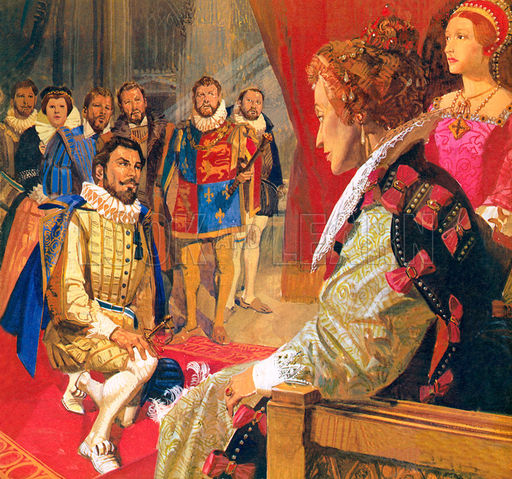 Sir Walter Raleigh was in favour with Queen Elizabeth until he fell in love with the daughter of Sir Nicholas Throckmorton. Look AND Learn History Picture Library.

In 1590, she caught the eye of Sir Walter Raleigh, a rising royal favorite. In November 1591, the couple secretly wed after Elizabeth discovered she was pregnant. For months, Elizabeth kept her secret from the queen and withdrew to her brother’s house in London, where she gave birth to a son in March 1592. The queen came to discover what had happened and both Elizabeth and Raleigh were thrown in to The Tower of London.

In December 1592, after Elizabeth had lost her child, the two were released, but Raleigh was refused to be seen by the queen for a year and the queen never forgave Lady Raleigh. In 1601, an attempt to restore her at court failed. Lady Raleigh spent most of her time at Sherborne, their country home in Dorset. In 1593, Lady Raleigh gave birth to another son named Walter at Sherborne. Lady Raleigh did come and go between London, but much of the 1590s saw husband and wife separated from each other.

Sir Walter Raleigh lead an exhibition to the Orinoco basin to South America in 1595; while in 1596, Raleigh was made a leader of the Cadiz Raid.

After the ascension of James I in 1603, Raleigh’s enemies at court convinced King James that he was a threat and Raleigh was imprisoned again in the Tower.

In 1605, Lady Raleigh gave birth to another son named Carew either in or around the Tower. In 1609, the King confiscated Sherborne and Lady Raleigh was given a small pension to live off of.

Lady Raleigh lived with her husband  until 1610.  Despite her many appeals, her husband was executed on 29 October 1618. Lady Raleigh ended up keeping her husband’s head which she had embalmed. It is said that she carried the head with her until her own death. Whether that’s true, who knows!

Bess would go on to rebuild her life after the death of her husband. She was perused by creditors for the rest of her life but in time came to clear her family’s name. She earned back her fortunes and prospects and ended up a rich widow in time. Bess became good friend to John Donne and Ben Jonson [the play write], and mother of an MP. 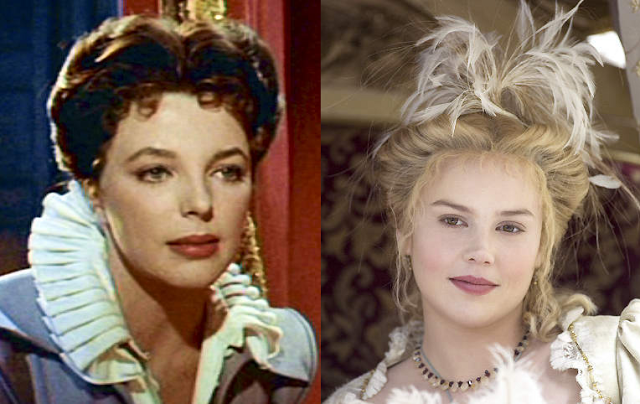 Elizabeth “Bess” Throckmorton portrayals through out the years in film.

“My Just Desire: The Life of Bess Raleigh, Wife to Sir Walter” by Anna Beer.