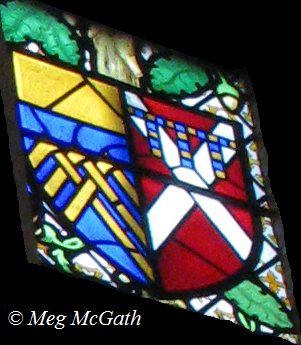 She is best known for being the great-grandmother of Queen consort Katherine Parr and her siblings, Anne and William, as well as one of the sisters of Sir Richard Neville, 16th Earl of Warwick, known as the ‘Kingmaker’. Her family was one of the oldest and most powerful families of the North. They had a long standing tradition of military service and a reputation for seeking power at the cost of the loyalty to the crown as was demonstrated by her brother, the Earl of Warwick.[2] Warwick was the wealthiest and most powerful English peer of his age, with political connections that went beyond the country’s borders. One of the main protagonists in the Wars of the Roses, he was instrumental in the deposition of two kings, a fact which later earned him his epithet of “Kingmaker”.

By her paternal grandmother, Lady Joan Beaufort, Countess of Westmorland, she was the great-great-granddaughter of King Edward III of England and Philippa of Hainault. Lady Joan Beaufort was the legitimized daughter of Prince John of Gaunt, 1st Duke of Lancaster and Aquitaine, and his mistress, later wife, Katherine Roët Swynford. As such, Lady Alice was a great-niece of King Henry IV of England. By her father, the Earl of Salisbury, she was niece to Cecily, Duchess of York, mother to Edward IV and Richard III. Alice’s mother was the only child and sole heiress of Sir Thomas Montacute, 4th Earl of Salisbury by his first wife Lady Eleanor Holland [both descendants of King Edward I].  Alice’s maternal grandmother, Lady Eleanor Holland, was the granddaughter of Princess Joan of Kent, Countess of Kent and Princess of Wales. Princess Joan was of course the mother of the ill-fated King Richard II making Eleanor Holland his grandniece. Princess Joan herself was the daughter of Prince Edmund of Woodstock, 1st Earl of Kent; son of Edward I by his second wife, Marguerite of France.

Alice and her siblings would visit their grandmother, Lady Joan Beaufort, the Countess of Westmorland, often at her manors in Middleham and Sheriff Hutton. After Beaufort’s death in 1440, her father inherited the manors and Alice and her siblings began living in the manors on a more permanent basis. At the age of four, Alice started lessons in Latin and French with an introduction to law and mathematics. Alice began every day by attending mass with her family. As the tradition of most nobility of the times, the parents were absent attending to the King’s matters or personal business. They only saw each other on special occasions.

The uneasy years of the 1450s were used by Salisbury to conclude the marriages of the rest of his children. The rest of the daughters married members of solid, baronial families, but in some cases poorer and less influential than the other matches Salisbury made for his elder daughters. Salisbury obviously preferred to arrange great, rather than acceptable marriages, but as the War of the Roses continued his ability to secure them became more difficult.[3] With the death of Salisbury’s mother, Lady Joan Beaufort, his direct link to the royal family (Henry VI) was broken. That may have also stippled his matches for his daughters. Henry VI was a second cousin of the half blood. However, the children of Salisbury’s sister, the Duchess of York — were his nephews and nieces (the future King Edward IV and King Richard III, etc).

Lady Alice was either married in her late teens or early twenties to her father’s associate, Sir Henry, 5th Baron FitzHugh of Ravensworth. Lord FitzHugh had been a long-standing supporter of the Neville family; he supported Alice’s father, the Earl of Salisbury, in his dispute with the Percy family in the 1450s. Lord FitzHugh also served with the earl on the first protectorate council. Lord FitzHugh would go on to become a close ally of Alice’s brother, “Warwick, the Kingmaker”, during the War of the Roses. After her marriage to Lord FitzHugh, Alice immediately began to have children.

Lady Alice, who was close to her niece Lady Anne (Neville), Duchess of Gloucester, was very supportive of Anne’s husband, Richard, Duke of Gloucester after he had become Lord Protector of the Realm. After watching the outcome of her brother, the Earl of Warwick’s, involvement with both the houses of York and Lancaster she influenced her family members to support the Duke of Gloucester as well.[2] Her reasoning behind backing Lady Anne and Richard of Gloucester was that she was most likely tired of the war between her cousins, and wanted to stay in favour with whomever came to the throne next, which would be the Duke as Richard III and her niece, Queen consort Anne.

When the Duke of Gloucester became King Richard III in 1483, Lady Alice and her daughter, Elizabeth, were appointed by the Queen as her ladies-in-waiting. The two received presents from the King which included yards of the grandest cloth available to make dresses. At the coronation in 1483, it was Alice and Elizabeth who were two of the seven noble ladies given the honour to ride behind the queen.[2] The position of lady-in-waiting to the Queens of England became a family tradition spanning down to Lady FitzHugh’s great-granddaughter, Lady Anne Herbert (Parr) who served all of King Henry VIII’s six wives.[7]

Lady Fitzhugh was very much the same temperament of her brother the Earl of Warwick. Although her husband, Henry, Lord FitzHugh is generally given credit for instigating the 1470 rebellion which drew King Edward IV into the north and allowed a safe landing of the Earl of Warwick in the West country, the boldness of the stroke is far more in keeping with Alice, Lady Fitzhugh’s temperament and abilities than with her husband’s.[8]

After the death of her husband on 3 June 1472, Lady Fitzhugh along with her children Richard, Roger, Edward, Thomas, and Elizabeth joined the Corpus Christi guild at York.[9] Lady FitzHugh never remarried. As Dowager Lady FitzHugh, Alice spent much of her widowhood at West Tanfield in Yorkshire as to not overshadow the new Lady FitzHugh, Elizabeth Borough (or Burgh), daughter of Sir Thomas Borough (or Burgh), 1st Baron of Gainsborough and his wife Margaret de Ros.[3]

Lady FitzHugh died on 22 November 1503 probably at West Tanfield, Yorkshire, where she spent her widowhood. There is no record as to where Alice chose to be buried. She may have chosen to be buried with her husband, Lord FitzHugh, and his ancestors at Jervaulx Abbey in Yorkshire or the church of St. Nicholas at West Tanfield (Yorkshire) near the Marmion Tower where she spent the last years of her life.[3]

By her mother, Alice Neville descended from Henry I of England, Henry II of England, John I of England, Henri I of France, William I “the Lion” of Scotland, David I of Scotland, and by two children of King Edward I of England: Princess Joan of Acre, daughter of Edward and his first wife, Eleanor of Castile by her marriage to Sir Ralph Monthermer, Earl of Gloucester and Hereford; Prince Edmund of Woodstock, 1st Earl of Kent, son of Edward and his second wife, Princess Marguerite of France. She also descended from Infanta Berenguela of León, Empress of Constantinople.

Lady Alice’s maternal grandmother was Lady Eleanor Holland. Eleanor’s sister, Lady Joan Holland married Edmund of Langley, 1st Duke of York, the younger son of Edward III and Philippa of Hainault. The marriage resulted in no children, but Edmund married again to Infanta Isabella of Castile, the younger sister of Infanta Constance of Castile, the second wife of John of Gaunt. If that doesn’t give you a headache — one of their sons was Richard of Conisburgh, 3rd Earl of Cambridge who married Anne Mortimer, niece of Lady Eleanor Holland who descended from Lionel of Antwerp, 1st Duke of Clarence, another son of Edward III — their son (Richard and Anne Mortimer’s son), Richard Plantagenet, 3rd Duke of York, already a cousin, became the husband of Lady Alice’s aunt, Cecily Neville, Duchess of York. Through the Duchess of York, Alice was first cousins of Edward IV of England; Edmund, Earl of Rutland; Margaret of York; George Plantagenet, 1st Duke of Clarence, and Richard III of England.

Lady Fitzhugh’s niece, Anne of Warwick, daughter of Warwick, was the wife of Richard, Duke of Gloucester, who became King of England as Richard III. On April 1483, the Duke of Gloucester was appointed as Lord Protector to his nephew Edward V of England, who was only 12 at the time. After assembling a council which declared his brother, King Edward IV’s children by Elizabeth Woodville illegitimate, he threw Edward V and his brother into the Tower of London and the children were never seen again. Richard’s death in 1485 during the Battle of Bosworth Field, ended the House of York and the the Plantagenet dynasty.[4] Queen Anne’s elder sister, Lady Isabella Neville would marry King Richard III’s brother, the Duke of Clarence; this marriage would produce the last generation of Plantagenet’s — Lady Margaret Plantagenet, the 8th Countess of Salisbury, better known as Margaret Pole and her brother Edward Plantagenet, 17th Earl of Warwick.[5] Both would be executed by the new dynasty of the House of Tudor; Edward by King Henry VII and Margaret by Henry’s son, King Henry VIII.[6]