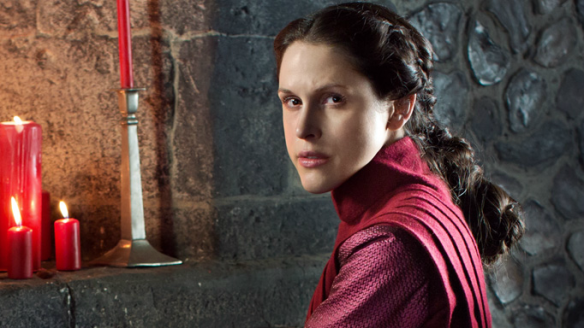 A loyal Lancastrian and cousin to the deposed King Henry VI (David Shelley). Margaret suffered a difficult childhood, raised by a loveless and vindictive mother (Lady Beauchamp – Frances Tomelty). In her darkest hour, she turned to God for comfort. She now believes she has been sent a sign that her young son Henry Tudor is destined to be King. Margaret’s terrifying determination to see her son take the throne, leaves her enduring loveless marriages solely to improve her political standing. She is willing to lay down her own life or even kill, so that her son Henry can be fitted for the crown. Her world is filled with cold, calculated maneuvering strictly for her and her son’s gain. — STARZ

Heiress to the red rose of Lancaster, Margaret Beaufort fervently believes that her house is the true ruler of England. Ignored by her sainted cousin Henry VI, mocked by her mother, married at age twelve, and endangered by childbirth, she vows to put her son on the throne. Naming him Henry, she sends him into exile and pledges him in marriage to the daughter of her sworn enemy.

Margaret charts her own way through loveless marriages, treacherous alliances, and secret plots. Finally, she gambles her life to mastermind one of the greatest rebellions of all time – all the while knowing that her grown son and his army await the opportunity to win the greatest prize. (Gregory)

Sir Thomas Parr’s father, William, 1st Baron Parr of Kendal, had once been Lady Margaret Beaufort’s revisionary heir to her substantial lands in Westmoreland, known as the “Richmond fee.” Lord Parr married to Hon. Elizabeth FitzHugh, daughter of Henry, 5th Baron FitzHugh and Lady Alice Neville (sister of Warwick). Lady Margaret Beaufort was a double second cousin to Elizabeth FitzHugh, Lady Parr [so she would have been a double second cousin, thrice removed of Katherine]. After the death of Lord Parr, his widow made a marriage with the Lancastrian family, the Vauxs’ of Harrowden. The Vaux family was close to Margaret, enjoying a long-term relationship with her. The previous Lady Vaux, mother of Thomas Parr’s step-father Nicholas, had been lady and friend to the Lancastrian queen Margaret of Anjou. Katherine, Lady Vaux served the queen during her exile. Nicholas Vaux (later 1st Baron Vaux) was a protege of Lady Margaret Beaufort. The young Thomas Parr [Katherine’s father and Margaret’s cousin] most likely studied under Maurice Westbury of Oxford who had been installed as a teacher by Lady Margaret Beaufort at her estate of Colyweston. It was at Colyweston that certain gentlemen, including the son of the Earl of Westmoreland [cousin of Sir Thomas], not only received an education but also gained political connections that would prove useful in their future careers.[1][2]


The White Queen BBC one commercial – Directors cut from Jamie Childs on Vimeo.