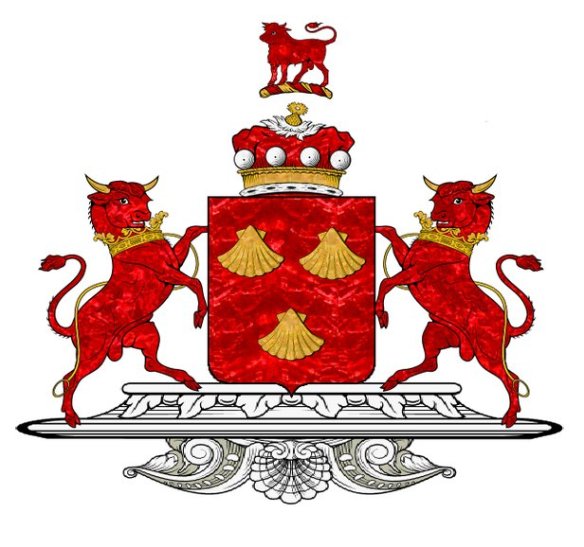 Coat of arms of the Barons of Dacre showing their heraldic charges, the Bull. European Heraldry.

Hon. Magdalen Dacre, Viscountess Montagu (January 1538 – 8 April 1608) was an English noblewoman. She was the daughter of William Dacre, 3rd Baron Dacre of Gilsland, and the second wife of Anthony Browne, 1st Viscount Montagu. Magdalen, a fervent Roman Catholic, was a Maid of Honour at the wedding of Mary I of England to Philip II of Spain in Winchester Cathedral. Dacre, despite being a Catholic, managed to remain in high regard with the Protestant Tudor Queen who succeeded Mary, Elizabeth I. Dacre was, according to biographer Lady Antonia Fraser in her historical biography, The Gunpowder Plot: Terror and Faith in 1605, a fine example of “how the most pious Catholic could survive if he (or she) did not challenge the accepted order”.

Magdalen Dacre died at Battle Abbey, Sussex on 8 April 1608 at the age of seventy. She was originally buried in Midhurst Church, where a splendid tomb with her effigy was erected. The tomb was moved in 1851 to Easebourne Church.