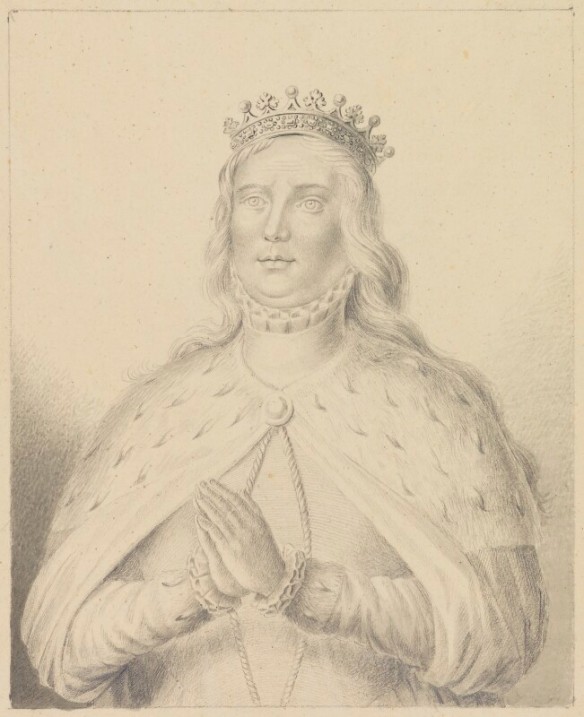 Anne Russell (née Sapcote), Countess of Bedford (died 1559) was the daughter and heiress of Sir Guy Sapcote and Margaret Wolston.[1] By her son by the Earl of Bedford, Anne is the ancestress of the current Dukes of Bedford. The current heir to the Dukedom is Henry Robin Charles Russell, Marquess of Tavistock (b. 2005). Anne is also an ancestor to other Dukedoms which include the Dukes of Beaufort and Manchester.

Anne married secondly to Sir Richard Jerningham. The two had no issue.[1] Jerningham was a diplomat and gentleman of the privy chamber for Henry VIII. However, Anne was widowed again by 1525.

As a twice widowed woman at court, Anne was involved in court politics, was intelligent, was mature, and was wealthy. One would say she sounded much like Katherine Parr did after her second husband, Lord Latimer, died in 1543. All of these characteristics made Anne a perfect match even if she had three children from her first marriage.[2]

A portrait of John Russell, 1st Earl of Bedford, after Hans Holbein the Younger

John Russell, 1st Earl of Bedford (1485-14 March 1555) was the son of James Russell and Alice Wyse. He married Anne in 1526.[1] At the time of their marriage, Russell was a newly made man of the privy chamber to Henry VIII. Russell would go on to serve as Lord High Admiral and Lord Privy Seal.

Russell’s career spanned over the reigns of King Henry VII to Queen Mary I. In 1506, he was in service to the future Queen Mary’s grandparents, Queen Isabel I of Castile and King Ferdinand II of Aragon, when they were shipwrecked at Weymouth. He escorted the couple to London and was praised by the royal couple to King Henry upon his manners. He became a gentleman of the privy chamber to Henry VII in 1507.

In the reign of Henry VIII, Russell was used for diplomatic purposes and was knighted in 1522 after he lost an eye fighting in Brittany.

In 1528, Anne lost her only son by her first marriage, John. She was overcome with grief. As noted by Sir Thomas Heneage,[2]

“My lady Russell takes the death of her son so sore that Russell fears, if she should not obtain your favour [Cardinal Thomas Wolsey] for the wardship of the younger sister, it will be her utter undoing.”[2]

Sadly, the power struggle between Anne Boleyn and Wolsey would keep Lady Russell from obtaining the wardship of her daughter, which she so desperately hoped for.[2]

Anne helped her husband on many occasions. She is known to have appealed to Lord Cromwell about debts that had not been repaid to her husband. She sent gifts to the King and when John was sick, she sent a letter to Cromwell to send a doctor. In an effort to secure the wardship of Anne’s daughter, John also wrote in 1528, but failed to obtain it. He did however secure the wardship of other family members. He also secured the property rights as the Sapcote’s heiress.[2]

However, in 1535, Anne lost yet another child. This time it was Katherine who had become Baroness as the wife to Baron Effingham.

Sir John Russell survived the fall of Anne Boleyn and was made a Privy Counsellor in 1536. In 1539, he became a Knight of the Garter. He was also granted some of the estates of the attained Duke of Buckingham who had been executed for treason. He became Comptroller of the Household from 1537-1539.

Russell continued to rise among his peers and was granted the title Earl of Bedford on 19 January 1550 by the boy King, Edward VI. 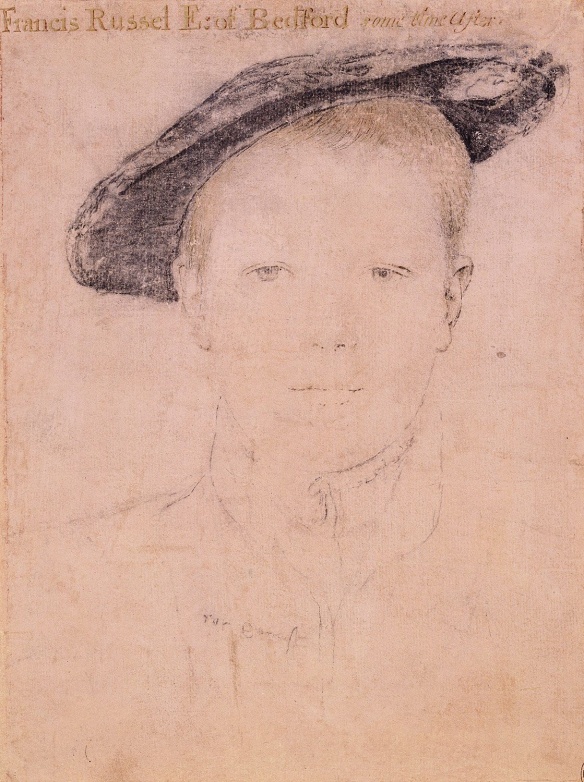 Portrait of Lord Francis Russell. Black and coloured chalks, pen and Indian ink on pink-primed paper, 24.2 × 18.1 cm, Royal Collection, Windsor Castle. The drawing is heavily rubbed and disfigured, and the penwork is not original. Francis Russell (1527–1585) was the son of John Russell, Ist Earl of Bedford, whose portrait Holbein also drew. He succeeded to the earldom in 1555. Reference K. T. Parker, The Drawings of Hans Holbein at Windsor Castle, Oxford: Phaidon, 1945, OCLC 822974, p. 55.

The couple had one son and heir, Francis (1527-28 July 1585). Francis eventually became the 2nd Earl of Bedford upon the death of his father. Like his father, Francis was very active at court. He rose to prominence under Queen Elizabeth I. He was made privy councillor and was an Ambassador. His tasks included that of representing Her Majesty at the christening of Prince James Stuart (the son of Mary, Queen of Scots and Lord Darnley). He was a guest of honor at the subsequent banquet and masque held in the Prince’s honor. Francis married to Margaret St. John, the great-great-granddaughter of Margaret Beauchamp of Bletso. The couple had four sons and three daughters. He married secondly to Bridget Hussey, daughter of John Hussey, 1st Lord and Lady Anne Grey, daughter of the 2nd Earl of Kent and Lady Katherine Herbert. Francis had no issue by his second wife. His issue by his first wife included Lady Elizabeth who married the Earl of Bath and had issue, Lady Anne who married the Earl of Warwick, Lady Margaret who married the Earl of Cumberland and had issue, and Lord William Russell who became the father to the 4th Earl of Bedford. Lord William Russell was the grandfather of William Russell, 1st Duke of Bedford.[1]

Anne died in 1559. Her and her husband were buried in the Bedford Chapel in Chenies, Buckinghamshire. A description of the monument erected is below.

In the chancel is the oldest completed monument in the Chapel, early 16th c. most probably of Italian workmanship. Executed in red-veined alabaster, probably from Derbyshire, entirely uncoloured. The sides of the tomb chest are panelled, ornamented with pilasters, arabesques in relief and inlaid with Venetian Renaissance motifs of lozenges and roundels of clouded black marble and polished flint. Carved shields with achievement of arms are in each panel and at ends – eight in number. Recumbent effigies of the Earl and Countess, hands joined and raised in the attitude of prayer – the Earl’s figure clad in plate armour with the collar and mantle of the Garter, coronet and cross hilted sword. The head is on a helmet with goat couchant crest, mantling arranged to cover the hollow end and the feet on a lion. The face is modelled from a portrait of the Earl, by Holbein, in Woburn Abbey and indicates the droop of the eyelid over the eye which was damaged by an arrow at the siege of Morlaix in 1523. [Heraldry of the Bedford Chapel Chenies]