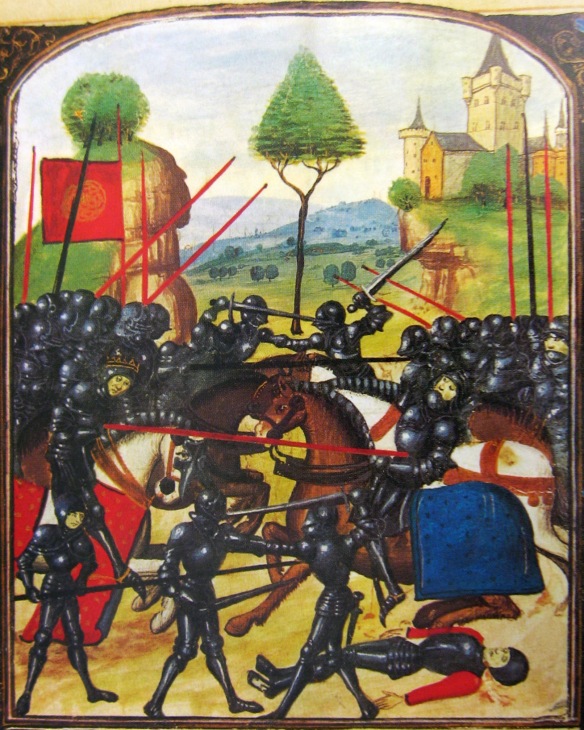 Late 15th-century artistic portrayal of the battle: Edward IV (left), wearing a crown and mounted on a horse, leads the Yorkist charge and pierces the Earl of Warwick (right) with his lance; in reality, Warwick was not killed by Edward.

14 APRIL 1471 — the battle of Barnet. Warwick, who had joined with Margaret of Anjou, fought King Edward IV. On this field, Sir Richard Neville, 16th Earl of Warwick (great-uncle to Sir Thomas Parr of Kendal, father to Queen Katherine) AND Sir Thomas Parr (great-uncle of Queen Katherine) died. Uncle Thomas Parr, who had previously fought with Warwick, fell fighting along side the Duke of Gloucester (future King Richard III); fighting for the House of York.

Sir Thomas Parr (brother to Queen Katherine’s grandfather, Sir William, Baron Parr of Kendal) in 1471 had become a retainer of Richard, Duke of Gloucester. His brother, John (later Knt.), had become an esquire of the body in King Edward IV’s household. Lord Parr was given a position in the north with his uncle-by-marriage, Warwick (Lord Parr’s wife, Hon. Elizabeth FitzHugh, was a niece of Warwick). Lord Parr would find himself on the opposite side of his brother’s as Warwick’s power grew. By the time Warwick had made alliances with Margaret of Anjou, Lord Parr had abandoned Warwick. No family was guaranteed to come away from this war without losses and the Parrs’ were no exception. Sir Thomas Parr would die fighting for the York cause alongside the Duke of Gloucester. (Porter)