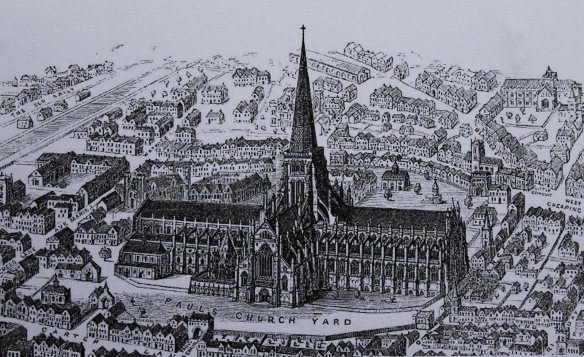 18 APRIL 1570: THE FUNERAL of Sir William Herbert, 1st Earl of Pembroke took place at Old St. Paul’s Cathedral in London. Pembroke had been the husband of Lady Anne (Parr), sister of the late Queen Katherine and the Marquess of Northampton.

Lord Pembroke died on 17 March 1570 at Hampton Court Palace. William was eldest son of Sir Richard Herbert of Ewyas, Herefordshire, by his wife Margaret, daughter of Sir Matthew Cradock of Swansea. Pembroke’s father, Sir Richard, was an illegitimate son of the original Herbert first creation of the Earldom, William Herbert, 1st Earl of Pembroke (d. 1469), by a mistress, Maud, daughter of Adam ap Howell Graunt. He married firstly to Anne Parr in 1538 and after her death, Lady Anne Talbot, daughter of the Earl of Shrewsbury. Parr gave Pembroke an heir (the 2nd Earl), an heir to spare (ancestor to the Earls of Powis), and a daughter (no issue). Talbot had no issue by Pembroke.

In his will, Pembroke listed two possible burial places; Old Saint Paul’s or Canterbury Cathedral. If he died near London, his wishes were to be buried in St. Paul’s Cathedral next to his first wife, Lady Anne (Parr). Pembroke obviously loved his wife for when he wrote his will, despite being married again, he wanted nothing more than to be buried “near the place where Anne my late wife doth lie buried” in St. Paul’s.

On Tuesday, 18 April 1570, Pembroke was buried with great state and ceremony in Old St. Paul’s Cathedral. His funeral was attended by all the principle members of the Government, as well as all the numerous officers of his household. A full list is provided in “Wiltshire Archaeological and Natural History Society,” 1879. The list states the various positions and who attended to them.

“An ordre of Proceedinge at the funerall of the late right Honorable William Erle of Penbrooke one tuisdaye the xviijth daye of April 1570,”

Mourners assistants with their hoods on:

Six noblemen with their rolls:

One of the three knights with their hoods on their shoulders included Sir Francis Knollys.

“The proceedinge to the offringe as heerafter folowith: First the chief mourner, his trayne borne, and all the rest of the mourners to folowe and none to offerre but he and the officers of Arms before him.

Then the chief mourner to goe upp alone, and to offerre for himself, and ther to remayne untill all the hatchements  be offred, whiche he shall receyve and delyuer to York Herauld, who shall set theim one the communion boord: then he to be brought downe agayne to his place.

First the Lorde Keper [and] The Erle of Leicester; Garter Kinge of Armes before them

Then the banner of his armes, Then the Standert; a Harauld before either of theim

Then all other gentlemen having no blackes that will offere

Then the offringe donn and a certayne collect reade all the chief mourners and noble men departed leauinge the officers and assistantes to see the body buryed . Which officers did putt  the Defunctes staff into the graue and brake eche of theim ther owne staves and cast theim into the graue with him.”

Pembroke’s tomb (along with Lady Anne Parr) was located between the choir and the North aisle. The tomb was/is by John of Gaunt and Blanche of Lancaster, between the pillars of the 6th bay of the Choir. (Benham) It was a magnificent structure consisting of effigies of the earl and his lady (Anne Parr) lying on a sarcophagus, attended by kneeling children, and the whole covered by an elaborate canopy resting on stone shafts. (Clinch)

Tomb of William, Earl of Pembroke, in St Paul’s; the tomb on a tall base on which lie a man and wife, in ermine robes, heads to left; eleven columns support a double arch above and obelisk topped extensions at the sides; two cartouches at top, to the left with coat of arms and to the right with dedication by ‘Ioh Herbert’; illustration to William Dugdale’s ‘History of St Paul’s’ (London, 1658 and 1716) Trustees of the British Museum