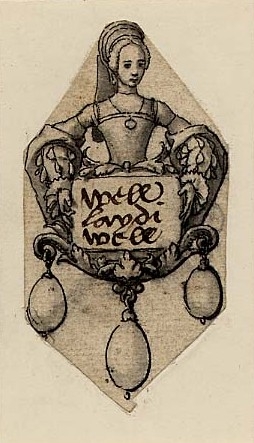 Description
Pendant, with a lady holding a stone, and three hanging pearls, one of three designs for jewellery with inscriptions, from the ‘Jewellery Book’; half-length figure of a lady facing front, her head turned slightly to right and wearing a head-dress, holding an inscribed rectangular tablet in front
Pen and black ink, with grey wash.

‘The Master of the Countess of Warwick’, ‘Portrait of a lady, aged 21, possibly Helena Snakenborg’, dated 1569. The brooch can be seen around her neck hanging from a gold chain.

‘Although there appears to be no surviving example of this type, as Sjögren has noted, the sitter in the painting, according to Strong, by ‘The Master of the Countess of Warwick’, ‘Portrait of a lady, aged 21, possibly Helena Snakenborg’, dated 1569 (R. Strong, ‘The English Icon’, London and New York, 1969, p. 113, no. 61, repr.) in the Tate Gallery (T400) is wearing a very similar pendant jewel, in which the half-length figure of a lady is depicted holding a large stone. This suggests that the inscription was a later, although probably still sixteenth-century, addition. Sjögren makes the tempting, not impossible, proposal that they are one and the same jewel and further conjectures that it was given to the sitter by William Parr (1513-71), the Marquess of Northampton, brother of Queen Katherine Parr, prior to her becoming his third wife in 1565. It is conceivable, if so, that the jewel had originally been ordered in the 1540s for Parr’s first wife, Anne Bourchier.’

By 1540, Parr’s marriage was already in trouble. It is doubtful Parr ordered this for his adulteress wife who ran away in 1541 with her lover. Helena also did not become Parr’s wife until the death of Anne Bourchier on 28 January 1571. Perhaps it was ordered for Elisabeth Brooke, Parr’s common wife by law.

When in doubt–don’t post a portrait of an unknown noble in the place for someone who has no known portrait. I have noticed that certain blogs have taken unknown portraits of Tudor women and used them as an example for their blog. What’s wrong with this? Well thanks to PinInterest and other sites, people come by web pages and snatch the portraits without properly identifying them. I should know, it’s happened to me several times. And due to this..there is a circulation of one portrait for a certain relation of Queen Katherine Parr who in fact has no known portrait. What’s worse is the woman in the painting is pregnant when we know there were no children by her husband, but rather by her lover. 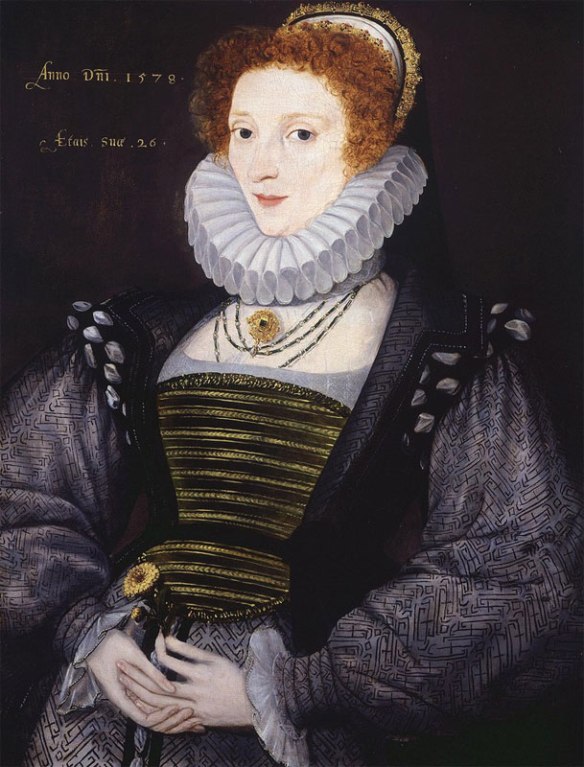 Unknown Woman by Gower, 1578 is NOT Anne Bourchier.

So let’s get this straight. Wives 1, “2”, and 3. Sir William Parr, Baron Parr of Kendal, Earl of Essex, and eventually 1st Marquess of Northampton had three wives. Only two are known to have legit portraits. That’s William’s common law wife, Elisabeth Brooke, whom he wasn’t technically allowed to marry due to the fact that he could not get a divorce from his first wife, Lady Anne Bourchier who had left him for her lover. William could only file for an Act of Parliament to keep any illegitimate offspring of Anne and her lover from inheriting from him. This, he was granted during Henry VIII, Edward VI, and Elizabeth I’s reign. In the reign of Mary I, however, Parr had to endure his wife after being thrown in the Tower for trying to put Lady Jane Grey on the throne. People think that Lady Anne saved Parr’s life — honestly, she was only after money and property. Queen Mary finally relented however and let him go free but without his titles, etc.

Back to the portraiture — Elisabeth Brooke and his third wife, Helena were painted. 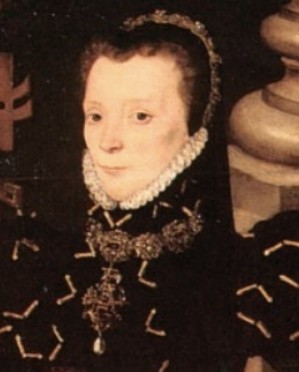 Elisabeth Brooke, Lady Northampton from the family portrait of the Brooke family.

Elisabeth Brooke’s portrait is from a larger portrait of her family. There is also a coin issued for her. 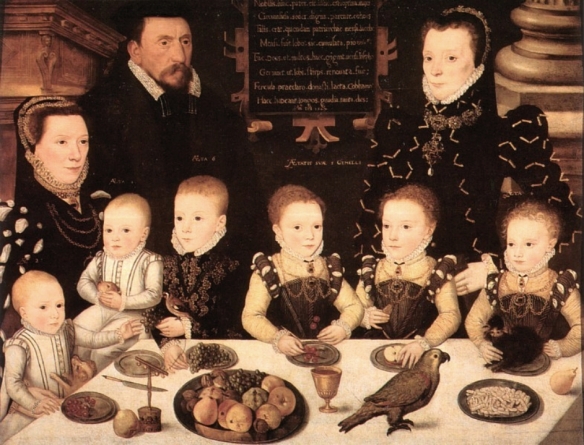 The Brooke Family of Elisabeth Brooke.

The portrait of Helena — there are thought to possibly be two.

Thought to be Helena, Marchioness of Northampton