Lately on Pinterest I have noticed that a certain portrait has become labeled as a member of Queens Anne Boleyn and Katherine Howard’s family. The woman in the portrait is being credited as their grandmother (or whatever) “Lady Elizabeth Cheney Tilney“. The link used on each pin belongs to The Royal Collection of Her Majesty Queen Elizabeth II and if clicked on — the title is clearly stated as being “Elizabeth Cheyne, Lady Vaux (1509-1556)“.[1]

The only daughter of Sir Frederick Tilney and Lady Elizabeth (born Cheney), Elizabeth, married firstly to Sir Humphrey Bourchier by whom she had issue. After her first husband died, the widowed Lady Bourchier became the wife of Sir Thomas Howard, Earl of Surrey (later Duke of Norfolk) on 30 April 1472. This couple was parents to Lady Elizabeth Howard (mother of Anne Boleyn) and Sir Edmund Howard (father of Katherine Howard)–the two doomed queens of King Henry VIII.

Will the Real Elizabeth Cheney Please Stand Up?

As for the REAL Elizabeth Cheyne (or Cheney)–she was born in 1509; around the time that Anne Boleyn may have been born. Elizabeth was the daughter of Sir Thomas Cheyne of Irthlingborough, an Esquire of the Body to Henry VIII, and Lady Anne (born Parr). Sir Thomas Cheyne (d.1514) was the son of Sir John Cheyne of Fen Ditton (c.1424-1489) and his wife Elizabeth Rempston (born c.1418)–see below for more info.[8] Lady Anne’s parents were Sir William Parr, Baron Parr of Kendal and Lady Elizabeth (born FitzHugh). By her parents, Lady Anne was a paternal aunt to Henry VIII’s last queen, Katherine Parr. In 1516, Elizabeth Cheyne became a ward of of her step-grandfather, Sir Nicholas (later 1st Baron Vaux of Harrowden). In 1523, she was married to Sir Thomas Vaux (later 2nd Baron Vaux of Harrowden); the heir of Lord Nicholas Vaux by his second wife.[1][2][3]

The Close Circle of Nobility

Now this is where the history of the Vaux and Parr families become extremely confusing to some–Elizabeth Vaux and Katherine Parr’s grandmother, the widowed Lady Elizabeth Parr (born FitzHugh), married secondly to Sir Nicholas Vaux (later 1st Baron) as his first wife. This move was made as a measure to ensure loyalty to the new Tudor King, Henry VII. Lord Vaux’s mother, Katherine, had been a loyal supporter of the House of Lancaster and Queen Margaret of Anjou (wife of Henry VI). Elizabeth FitzHugh, herself, was loyal to the House of York. Her mother Lady Alice Neville was a daughter of Sir Richard, 5th Earl of Salisbury. As such, Elizabeth was a niece of Richard, Earl of Warwick “Warwick, the Kingmaker”. As close family members, Elizabeth and her mother were part of the coronation train of Queen Anne (born Neville) and attended her as ladies afterwards. Elizabeth and Nicholas had three daughters. One was the wife of Sir George Throckmorton, also named Katherine (née Vaux). After Elizabeth FitzHugh died, Lord Vaux married secondly to Anne (née Greene); the maternal aunt of Queen Katherine Parr. By Anne, Lord Nicholas had his heir–Thomas–who married Elizabeth Cheyne. Upon Thomas and Elizabeth’s marriage in 1523, Elizabeth was formally titled Lady Elizabeth Vaux or Lady Vaux. The family tree of Anne Boleyn and Katherine Howard have no such lady with this title.[2][3]

As for Sir Thomas Cheyne–here is where some people may have confused the portrait. Cheyne was of the same lineage as Lady Elizabeth Tilney/Saye (born Cheney), daughter of Sir Lawrence (d.1461) and Elizabeth Cokayne. Thomas’s father, Sir John (d.1489), was Elizabeth Cheney’s brother. So there is a connection there, but the daughter of Sir Thomas was not an ancestress to the Boleyn or Howard family.[7][8]

About the Work of Art

Above: the actual sketch from Windsor Castle’s collection of Holbein’s portraits. It is described as using Black and coloured chalks, white bodycolour, wash, pen and ink, brush and ink, and metalpoint on pale pink prepared paper; 28.1 x 21.5 cm[1]

The original sketch was acquired by Edward VI in 1547 after the death of his father, Henry VIII. Henry FitzAlan, 12th Earl of Arundel bequeathed the portrait to John, Lord Lumley in 1580. Lord Lumley probably bequeathed the portrait to Henry, Prince of Wales in 1609, and thus, it was inherited by Prince Charles (later Charles I) in 1612. Charles I exchanged the portrait with Philip Herbert, 4th Earl of Pembroke (the grandson of Lady Vaux’s other cousin, Lady Anne Pembroke (sister of Queen Katherine Parr) around 1627/8. Charles II acquired the painting through Thomas Howard, 2nd Earl of Arundel in 1675. It has been in the Royal Collection ever since.[1] 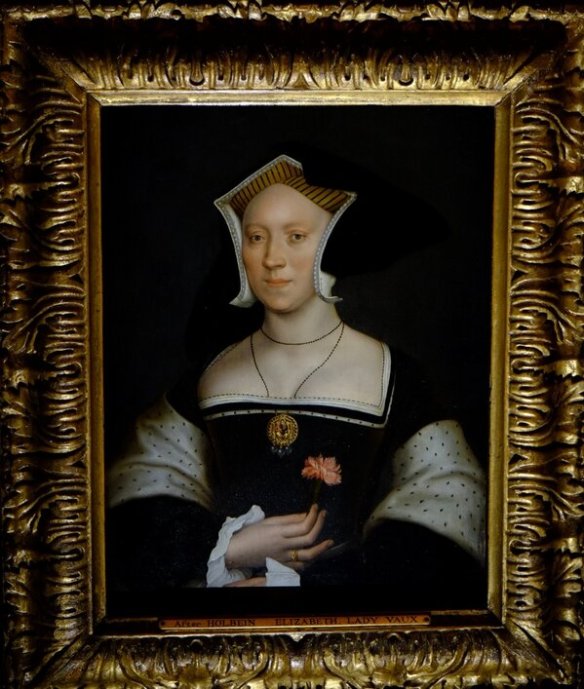 Henry VIII loved art and collected his fair share of portraits and drawings. There is a painting of ‘Lady Vaux’ at Hampton Court (above) which is said to have been painted by Holbein. It is one of three paintings recognized as genuine by the experts. However, others debate the authenticity and the painting at Hampton is labeled ‘After Holbein–Elizabeth, Lady Vaux‘. Elizabeth is depicted looking to the front, wearing a brown dress with ermine, with a jewel at her bosom decorated with the Madonna and Child enthroned. She holds a pink carnation in her right hand, and a cherry in her left. This is thought to be a competent copy after a lost original by Hans Holbein. The original was painted in 1535. This portrait hangs in the Haunted Gallery at Hampton. The authentic sketch of ‘Lady Vaux’ by Holbein (RCIN 912247) is at Windsor Castle.[1][4][5][6]

The only other copy of the painting of Lady Vaux is in Prague Castle Gallery of all places!

The portrait of ‘Lady Vaux’ hangs in the gallery at Prague Castle.

So, if you see the portrait of Lady Vaux on Pinterest; the caption is incorrect. The fact that people refuse to or do not know how to change the caption is rather sad in my opinion. Elizabeth had no direct connection to the Boleyn or Howard families. Why do I feel like the painting was and still is being labeled incorrectly? My theory: most people do not know anything about Katherine Parr’s extended family; it seems so much easier to associate a lot of things to the Boleyn family for some fans. And when some are called on it, it can get pretty nasty. I’ve had some really nasty comments after leaving my own comment about the true identity of the sitter. For some Boleyn fans, the research, so they think, has already been done. The caption must be correct. No. But who am I? Some random pinner–or so they think.

I won’t deny that as a writer on Parr, this whole situation makes me extremely angry. I have been writing for years on this family and just trying to correct a simple image has become tiresome and pretty unpleasant. What really bothers me is the fact that putting the wrong label on a portrait deprives the memory of the real person. To me, somehow that person becomes erased.

Elizabeth, Lady Vaux died shortly after her husband on 20 November 1556. She was most likely a victim of the plague which killed her husband.[9]

This is the work and research of Meg McGath. You may not reproduce or copy this material without written permission.