Hon. Elizabeth FitzHugh Lady Parr of Kendal and Lady Vaux of Harrowden (1455/65 – 29 January 1508) was an English noblewoman and the co-heiress to her father, Hon. Sir Henry FitzHugh, 5th Baron FitzHugh of Ravensworth. Lady Parr is best known for being the grandmother of the sixth queen of Henry VIII, Katherine Parr and her siblings Lady Anne Herbert, Countess of Pembroke and William Parr, 1st Marquess of Northampton. 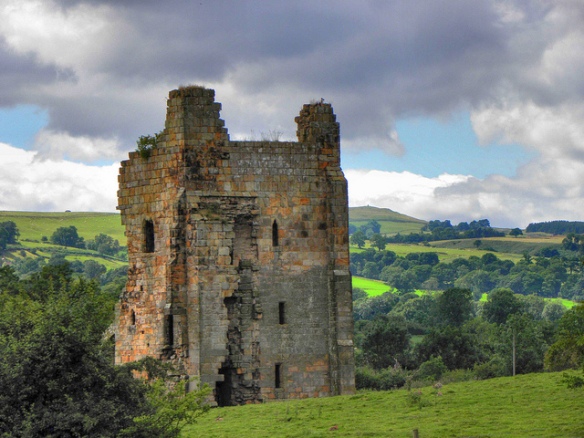 The current co-heirs to the barony are:

Elizabeth FitzHugh had an easy-going and pleasure-loving disposition. As Lady Parr, she joined the household of her cousin, the Duchess of Gloucester.[7] The Duchess of Gloucester was born Lady Anne Neville, the youngest daughter of Sir Richard Neville, 16th Earl of Warwick (“Warwick, the Kingmaker”) and Lady Anne Beauchamp. Lady Parr was close to her cousin which showed in her positions under Anne as Duchess and Queen consort. Because of the family connections, Elizabeth’s mother, Lady FitzHugh pressured Lady Parr’s husband, Lord Parr, to follow the rule of the Duke of Gloucester (later King Richard III) while he was serving as Lord Protector of the Realm. When the Duchess became queen in 1483, Lady Parr was appointed by the Queen herself and served as lady-in-waiting. Lady Parr and her mother were both present at the coronation on 6 July 1483. Both were dressed in fine dresses made by cloth that the King himself had given them. Elizabeth received seven yards of gold and silk; her mother received material for two gowns, one of blue velvet and crimson satin as well as one of crimson and velvet with white damask. It is not known which gown Elizabeth wore as she rode behind Queen Anne; but she was one of the seven noble ladies given this honour. Her husband who had been deeply devoted to Edward IV declined his role in the coronation and headed north where he died shortly after.[8]

After her husband Sir William Parr died in 1483, Elizabeth, who was twenty three at the time, was left with four small children. As a widow, Elizabeth’s life revolved around the court. Elizabeth would be second in a four generation span of family that would serve England’s queens which started in 1483 with her mother, the redoubtable Alice Neville, Lady Fitzhugh. Her granddaughter, Anne Parr would continue the tradition by becoming lady-in-waiting to all six of Henry VIII’s wives. Even Anne’s sister, Catherine Parr, who would later become queen served in the household of the Lady Mary until she caught the eye of King Henry.[3]
Elizabeth was lucky enough to remarry. After the overthrow of Richard III and The House of York, Elizabeth made a dubious second marriage with a protege of Lady Margaret Beaufort, Sir Nicholas Vaux, the future 1st Baron Vaux of Harrowden, which saved the family fortunes.[3]

FitzHugh was married twice. She married firstly, at the age of 12, Sir William Parr (d.1483), a man twenty eight years her senior. William was a Knight of the Garter, among other high positions at court, who was held high in favour with King Edward IV; who by marriage to Elizabeth became a cousin. He fought as a Yorkist on the side of the Neville’s at Banbury. The couple did not produce their first child until Elizabeth was sixteen years of age. Lord and Lady Parr had three sons and two daughters:

After the death of Sir William Parr in fall of 1483, Elizabeth re-married Sir Nicholas Vaux c.1484/5 (probably right before the fall of Richard III), who later became 1st Baron Vaux of Harrowden as his first wife.[4] Vaux was the protege of Lady Margaret Beaufort, mother of King Henry VII, so the marriage came at a good time, saving the family fortunes. Vaux’s mother, Katherine Peniston, had been lady to Margaret of Anjou and as such, the Vauxs’ were sympathetic to the Lancastrian cause bringing the Parr family back in to favor. Lady Katherine Vaux (Peniston) would remain with Margaret of Anjou in exile and died in her service.[6] After the accession of Henry VII, Vaux was raised by Lady Margaret Beaufort.[6] Elizabeth’s son by her first marriage, Sir Thomas Parr (father of Katherine), is thought to have been educated under Beaufort’s tutelage (Susan James) which would explain the closeness he formed with her grandson, King Henry VIII. Vaux became close to his Parr step-children. After the death of Elizabeth, Vaux would re-marry to Anne Green, sister to Lady Maud Parr and thus sister-in-law to Sir Thomas Parr.