In December of 1547, Queen Katherine Parr became pregnant for what most people believe to be the first time by her fourth and final husband, Sir Thomas Seymour. After four husbands and twenty years of marriage, Katherine was about to fulfill what she felt was the primary duty of a wife, to give birth to a healthy baby; boys being preferred in aristocratic circles. Like today, some titles still cannot be inherited by the eldest or only daughter of a peer; meaning a girl cannot inherit the title of her father which is usually then passed to the closest living male relative, that being usually an uncle or cousin.

Queen Katherine found pregnancy difficult. She still had an on-going feud with her brother-in-law, the Lord Protector and his rather nasty wife, had morning sickness, was constantly worrying about her step-daughter Lady Elizabeth, and the temper of her husband and lack of discretion towards his feelings for Lady Elizabeth must have made the early months of pregnancy extremely hard for the Queen Dowager.[1] In 1549, after the death of the Queen, two cramp rings for use against the pains of childbirth and three pieces of unicorn horn, sovereign remedy for stomach pains, were found in the chest of Katherine’s personal belongings which were talismans most likely from her husband and friend’s to alleviate the pains of childbirth and anticipated pangs of childbirth. Katherine was almost thirty-six, an advanced age to begin a pregnancy. The emotional strain of her household with Seymour’s infatuation with Lady Elizabeth couldn’t have helped her early months either.

As Katherine’s pregnancy progressed, her involvement in politics, if not her interest, diminished. She viewed her approaching motherhood with delight despite knowing the risks and the possibility that death in child birth was a very real possibility.

Seymour decided that Katherine should be confined as far away possible from the press of business and turmoil of the court as well as the summer plagues of London. Katherine was taken to Sudeley Castle in Winchcombe, England, outside of Cheltenham. The castle has a long history stretching back to William de Tracy. Richard III used the castle as campaign headquarters during the Battle of Tawkesbury; in which Katherine’s grandfather fought. Upon the death of Richard III, the castle reverted to the crown and new monarch, Henry VII; who gave the castle to his uncle, Jasper Tudor. After the death of Jasper Tudor, Sudeley reverted to the crown again, to King Henry VIII. In fact, the King made a visit to the castle with Anne Boleyn in 1535. Upon the ascension of Edward VI, Sir Thomas was created Lord Seymour of Sudeley and was granted the castle. In preperation for her lying-in, Seymour spent 1,000 pounds having the rooms prepared for her in his newly aquired house at Sudeley in Gloucestershire.[2] With beautiful gardens and walks, the castle would have been a perfect place for Katherine to spend the last three months of her pregnancy. 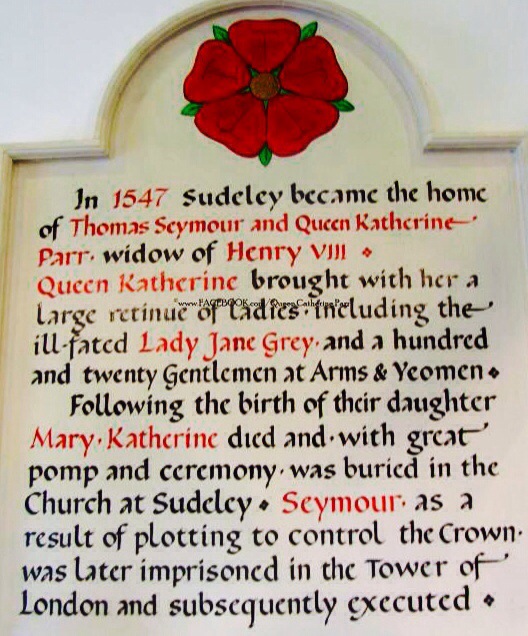 One of several plaques on the wall in the exhibit for Katherine Parr at Sudeley. © Meg McGath, 2012.

On Wednesday, 13 June 1548, Seymour accompanied his wife, who was now six months pregnant, and his young ward, Lady Jane Grey, from Hanworth to Sudeley Castle in Gloucestershire. Lady Elizabeth Tudor had been sent away that Spring so she did not accompany them. In this castle, Katherine spent the last three months of her pregnancy and the last summer of her life. Typical of Queen Katherine, she spared no expense when it came to attendants. She was attended by her old friend and doctor, Robert Huicke, and was surrounded by other old friends, Miles Coverdale, her chaplain, her almoner, John Parkhurst, Sir Robert Tyrwhitt, and the ladies who had been with her over the years such as Elizabeth Trywhitt and Mary Wodhull. Katherine also had a full compliment of maids-of-honour and gentlewomen as well as 120 gentlemen and yeomen of the guard. In spite of his duties, Sir Thomas Seymour seems to have spent most of that summer with his wife. Katherine whiled away her summer days overseeing the education of Lady Jane Grey while preparing for her baby. Her affections for her husband seemed as strong as ever, as was her belief in the final analysis, Seymour would make the moral choice over the immoral one.

The nursery at Sudeley Castle.

While Katherine awaited her confinement, Katherine continued decorating the nursery which overlooked the gardens and the Chapel. The nursery of an expected heir was done up in crimson and gold velvet and taffeta, with furniture and plate enough for a royal birth. In Seymour’s eyes, the child would be a member of the royal family as Katherine was still officially the only queen in England. After his daughter’s birth, Seymour was overheard telling Sir William Sharington that,

“it would be strange to some when his daughter came of age, taking [her] place above [the duchess of] Somerset, as a queen’s daughter.”[3]

Besides the baby’s cradle was a bed with a scarlet tester and crimson curtains and a separate bed for the nurse.

The Queen’s Gardens at Sudeley Castle; Katherine Parr would spend her final days walking with Lady Jane Grey in these gardens. © Meg McGath, 2012.

The Queen continued to take the advice of her doctor and walked daily among the grounds of Sudeley, but she was still concerned about the politics and overseeing of the new boy king.

On the eve of August 30th, Katherine went into labour.
Sources 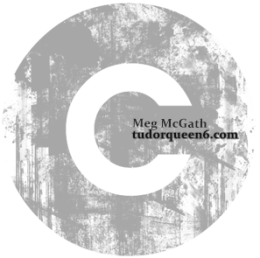