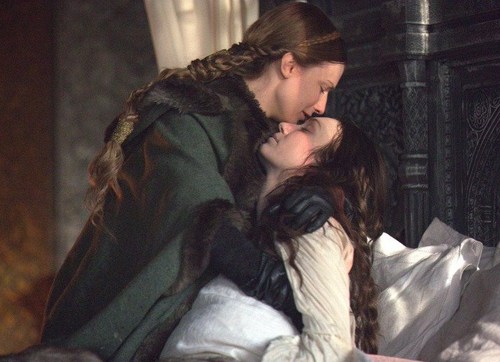 The death of Lady Isabel, episode 7.

So in tonight’s episode — they decided to kill TWO major characters off. And if you don’t feel a tad bit sorry for either one — remember these were actual people. Although the series is LOOSELY based off of historical events and people — these people DID die during one of the most dangerous periods of time in England. 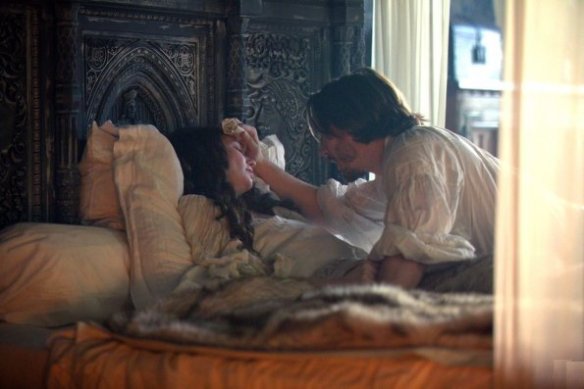 On 22 December 1476 Isabel Neville, Duchess of Clarence died at Warwick at the age of twenty-five. Her body was removed for burial to Tewkesbury Abbey, the mausoleum of her Despenser ancestors. It was received there on 4 January 1477 by Abbot Strensham and other prelates. A service of nine lessons was conducted by suffragans of the Bishops of Worcester and Lincoln with the assistance of the dean and chaplains of Clarence’s chapel. Members of his houseshold stood vigil for a whole night. On the morrow the bishops and the abbot conducted three masses, one in honour of the Virgin Mary, a second for the Holy Trinity and a Requiem mass. At the latter a Franciscan friar, Dr Peter Webb, made an oration. The duchess’s body lay in state in the middle of the choir until 25 January 1477, when it was placed in a vault newly constructed behind the high altar, where probably Clarence himself was laid to rest. In the meantime masses were celebrated daily for the duchess’s soul.
MA Hicks, False Fleeting Perjur’d Clarence, p 114.

Clarence quite probably kept vigil with his household. He was from all accounts deeply grieved by his wife’s death. Their marriage was a happy one and it does seem that he was faithful to her. Her funeral itself points to a widower who wished his wife to be remembered and honoured in death. Their children, Margaret and Edward, were 3 and 1 respectively.

Barely a month after Isobel’s death, Margaret duchess of Burgundy, newly widowed, suggested Clarence (her favourite brother) as a husband for her stepdaughter Mary. Edward opposed the idea. Around the same time, an idea was put to Edward that Clarence marry the sister of James III. This, too, Edward declined. Despite Clarence’s no doubt real sense of grief at Isobel’s death, and there’s no way of knowing if he would have married either party had the decision been left up to him, Edward’s disapproval of both matches greatly upset him and relations between the brothers, already shaky, began to deteriorate further.

In May 1477, two men associated with Clarence were executed for treason at Tyburn. There is no evidence that Clarence was involved, or that Edward believed Clarence to be involved. However, after their deaths, he went with a Dr William Goddard to a session of council where Goddard read out a declaration of the men’s innocence. Also in May, Ankarette Twynho, one of Isabel’s servants, along with two others, was arrested, tried, convicted and executed on a charge of poisoning the duchess. The conduct of the trial, which included the kidnapping and forced removal of Twynho to Warwick, was highly irregular.  Edward arrested his brother, not on accusations of treason but for bringing the laws of England and the justice of the king into question. This was not a charge that carried the death penalty. Some time before November, however, Edward changed his mind and Clarence was charged with treason.

The Death of George, Duke of Clarence via “The White Queen”

Clarence was tried in parliament on 16 January, condemned as a traitor and sentenced to death, which sentence was carried out in the Tower on 18 February. Edward honoured his brother’s wishes and allowed him to be buried with his duchess at Tewkesbury. Several contemporary and near contemporary sources speak of Edward’s almost immediate regret at Clarence’s death and his part in it. Cecily Nevill pleaded for her son’s life, and as a result of her appeal the sentence was commuted from the traditional traitor’s death. Though this has been called into doubt in recent times, it also seems that both Gloucester and Hastings made some attempt to see Clarence spared. This doesn’t quite tie in with the fact that, of everyone, Gloucester stood to gain most from Clarence’s death. He and Hastings were certainly not as closely involved in the process and proceedings as the earls Rivers and Dorset. However, neither of them, both influential with the king, spoke up quite loudly or clearly enough to save Clarence’s life. Both men, at the time, enjoyed friendly relations with the queen and her kin. The Wydevilles were four square behind both the changes to the charges against Clarence, his conviction and the carrying out of the sentence.