Portrait of Thomas Seymour (1508-49) 1st Baron of Sudeley from ‘Memoirs of the court of Queen Elizabeth’ — Sarah of Essex, out of copyright

Following the death of Queen Katherine Parr in September 1548, Lord Seymour didn’t even wait for his wife’s funeral before he returned to London. As he was free to marry Lady Elizabeth Tudor again, Seymour went straight to her for the second time. Seymour bombarded Elizabeth with letters, lent her his house in London, and coerced her governess Kat Ashley into pleading his case on any and every occasion possible. Of course, Elizabeth refused to comply, a move that probably kept her from being beheaded herself.

In his head, Seymour had a grand plan for himself and had acquired ten thousand men and was preparing for a military coup. As things started to go awry, Seymour refused to wait. He took a gun and broke into the private quarters of the King. On his way to the King, the boy King’s spaniel awoke and started to bark. Seymour shot the dog and the whole household was awoken. Seymour was arrested, thrown in the Tower, and accused of 33 charges of High Treason and misdemeanor.

Death scene of Queen Katherine played by Deborah Kerr and Stewart Granger as Thomas Seymour in “Young Bess” (1953). Kerr had a strong resemblance to the real Queen Katherine.

The authorities had thrown everything they could at Seymour. They even accused him in a possible connection to the death of his wife, the Dowager Queen. That ‘he helped to her end to hasten forth his other purposes.’ Seymour was never given a trial before his peers. Instead, an Act of Attainder (the same legal process that had be used to rid Henry VIII of Katherine Howard) was introduced to Parliament. It passed unopposed in the House of Lords on 25 February, and in the House of Commons on March 5, where it was only opposed by a handful of members.

The Act lists thirty-three charges trumped up against Seymour. In “The Annals of Winchcombe and Sudeley” by Emma Dent, she summarizes the charges: 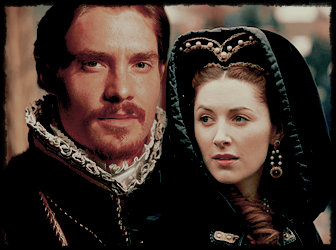 Edward and Anne Seymour from “The Tudors”

He was sentenced to death; his own brother signed his death warrant. Later it was said that his fate was sealed by the Duchess of Somerset, Anne, who had threatened to leave her husband if he did not act against his own brother. Whether or not that is true we do not know. It may simply be speculation.

The Act of Attainder concluded:

‘considering that he is a member so unnatural, unkind and corrupt and such a heinous offender of your majesty and your laws as he cannot be suffered to remain in body of your grace’s commonwealth but to the extreme danger of your highness and it is too dangerous an example that such a person, so much bound and so forgetful of it … should remain among us.’ He was to be ‘adjudged and attained of high treason and … shall suffer such pains of death as in cases of high treason have been accustomed.’

Seymour remained optimistic to the end and in his last moments tried to send Lady Elizabeth a message sewn into his servants velvet shoes. However, he retreated into silence as far as those who condemned him were concerned. While in the Tower, Seymour made his peace with the God others accused him of rejecting, writing the following lines:

‘Forgetting God
to love a king
Hath been my rod
Or else nothing:
In this frail life
being a blast
of care and strife
till in be past.
Yet God did call
me in my pride
lest I should fall
and from him slide
for whom loves he
and not correct
that they may be
of his elect
The death haste thee
thou shalt me gain
Immortally
with him to reign
Who send the king
Like years as noye
In governing
His realm in joy
And after this
frail life such grace
As in his bliss
he may have place.’ (Harington)

On the even of his death, Seymour requested his daughter should be given into the care of the Dowager Duchess of Suffolk, Katherine Willoughby. A few days later, Lady Mary Seymour, who was now about seven months old, was taken from Syon House (home to the Lord Protector and his wife, Anne) to the Duchess’s home — Grimsthorpe Castle in Lincolnshire. Upon the death of Mary’s mother, Queen Katherine, she had left all her wealth and possessions to her husband. Therefore upon his execution, Seymour’s wealth and possessions (which included that which he inherited by the Dowager Queen) reverted to the Crown and there was no money for his daughter.

Seymour was executed early in the morning of 20 March 1549. It took two blows of the axe to sever his head. He was buried in St. Peter’s Chapel in the Tower of London where other royals like Anne Boleyn, Lady Salisbury (the last Plantagenet “Princess”, daughter of the Duke and Duchess of Clarence), and Katherine Howard had been buried. Seymour’s own brother, Somerset (Edward), would join him in January of 1552 after his own execution under Edward VI; two uncles in one reign.

Elizabeth said, upon hearing of his death: “There died this day a man of much whit and very little judgement.”