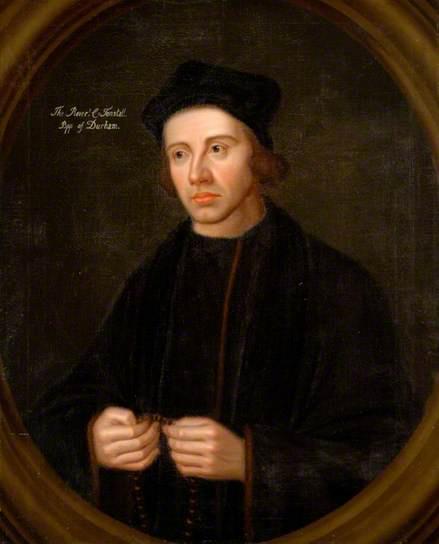 Cuthbert Tunstall (c. 1474/5 Hatchford, Richmondshire, England – 18 November 1559 Lambeth Palace, London, England) was an English church leader during the reign of four Tudor monarchs. Through out his lengthy career he was Bishop of Durham, Bishop of London, Archdeacon of Chester, Lord Privy Seal, Royal adviser, and a diplomat. He was “lucky” enough to have served as Bishop of Durham [among other offices] and actually survive the reigns of three Tudor monarchs; King Henry VIII, Edward VI [Protestant], Mary I [Catholic]. Under the Protestant Queen Elizabeth I, Tunstall would be arrested in 1559 after refusing to take the Oath of Supremacy and die under house arrest at Lambeth Palace [home to the Archbishops of Canterbury].

“Tunstall’s long career of eighty-five years, for thirty-seven of which he was a bishop, is one of the most consistent and honourable in the sixteenth century. The extent of the religious revolution under Edward VI caused him to reverse his views on the royal supremacy and he refused to change them again under Elizabeth.” – The Anglican historian Albert F. Pollard

Tunstall was illegitimate at birth, although his parents later married and the irregular circumstances of his background were never held against him. He was the son of Sir Thomas Tunstall, one of two sons of Sir Thomas of Thurland. Sharing a great-great-grandfather, Sir Thomas of Thurland Castle [Tunstall’s grandfather], Tunstall was a first cousin, twice removed on his father’s side to Queen Katherine Parr and her siblings Lady Anne Herbert and Sir William, 1st Marquess of Northampton. Tunstall was appointed as the executor of Sir Thomas Parr’s will. After his death, Tunstall continued to stay close to the Parr family. Tunstall advised Lady Maud Parr on the education of her children; especially that of her daughters. Maud named Tunstall as one of the executors of her will as well.

Tunstall was an outstanding scholar and mathematician, he had been educated in England, spending time at both Oxford and Cambridge, before a six year spell at the University of Padua in Italy, from which he received two degrees. His Church career began in 1505, after he returned to England. He was ordained four years later. At the time of his ordination four years later he had caught the attention of the Archbishop of Canterbury, William Warham, who sponsored Tunstall’s advancement and brought him to court. Tunstall was also a close to Wolsey, who recognized his potential to serve his country and diplomacy.

Cuthbert Tunstall [a portrait painted before the Reformation showed him with a rosary. It was obviously painted over].

Tunstall was a great publisher of many books including De arte supputandi libri quattuor (1522), which enhanced his reputation among the leading thinkers of Europe. This book would be used later by Mary Tudor and his cousin Catherine Parr as queen.

Like More, Tunstall was on intimate terms with King Henry VIII. During the King’s ‘Great Matter‘, Tunstall defended Queen Katherine of Aragon, but not with the vigour or absolute conviction of Bishop Fisher. Tunstall had been bold enough to tell Henry that he could not be Head of the Church in spiritual matters and he may have been one of the four bishops of the northern convocation who voted against the divorce, but he recognized that the queen’s cause was hopeless and never attempted opposition to the King. In fact, he attended Anne Boleyn’s coronation. But Tunstall felt he could not keep quiet, he wrote a letter personally to Henry about the rejection of Christendom, and other matters that bothered him. Henry disagreed and refuted every point Tunstall made. These exchanges led to a search of Tunstall’s home by order of the King, but no incriminating evidence was found. Rumor was that Sir Thomas More warned Tunstall in time to dispose of anything that might incriminate him. 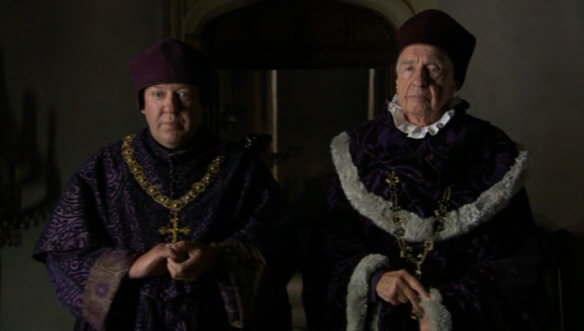 Tunstall agreed to take the oath, unlike More and Fisher. He and Archbishop Lee of York were required to explain to the imperial ambassador, Eustace Chapuys, and subsequently the very angry Katherine of Aragon the justification for the annulment of her marriage. They did not succeed in getting her to agree or acknowledge the fact that she was no longer queen.

After the ‘great matter’ was resolved, Tunstall turned his loyalty back to the King. Tunstall was an executor of King Henry VIII’s will. Tunstall would go on to serve in the reigns of Edward VI, Mary I, and Elizabeth I.

On 19 July 1553, Mary was proclaimed Queen. After being imprisoned in The Tower under the rule of Edward VI, Mary released him and he went back to being Bishop of Durham. During the reign of Mary, Tunstall was very lenient on the Protestants involved in the “Marian Persecutions.”

Lambeth Palace, London. The oldest parts of the present buildings date from the 1400’s. The most obvious external feature is the gatehouse which is framed on either side by two towers, built by in tudor brick by Archbishop Morton in 1495. This is consequently known as Morton’s Tower.

It was during Elizabeth’s reign that Tunstall refused to take Elizabeth’s Oath of Supremacy and was subsequently arrested. Even though he had been Elizabeth’s godfather, he was deprived of his diocese in September 1559, and held prisoner at Lambeth Palace, where he died within a few weeks, aged 85. He was one of eleven Catholic bishops to die in custody during Elizabeth’s reign. He was buried in the chancel of Lambeth church under the expense of the Archbishop that had overseen his confinement, Parker. 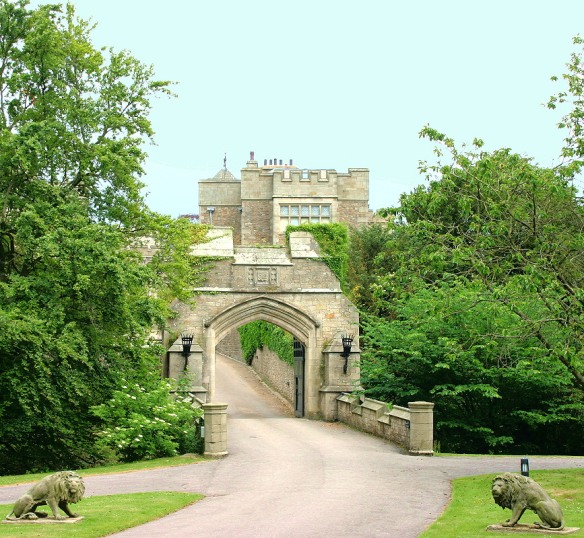 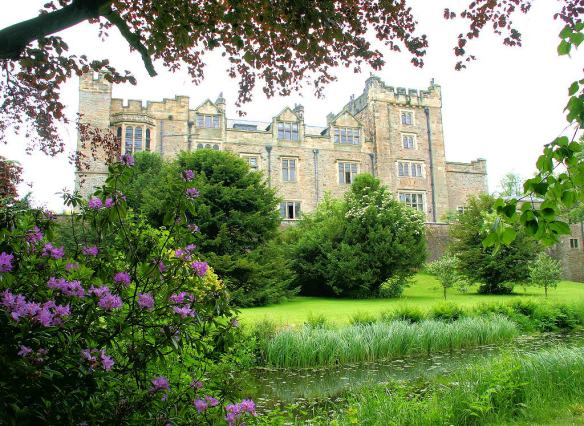 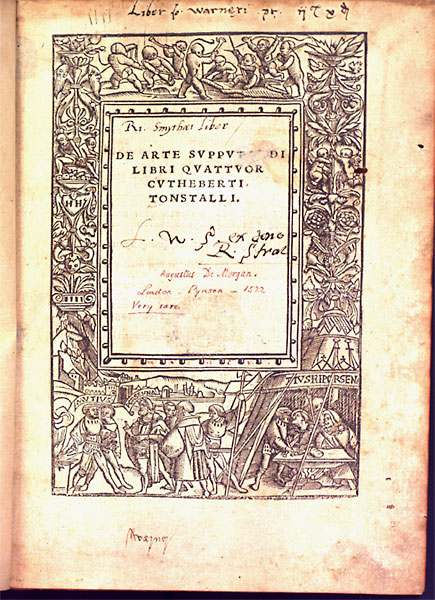 De Morgan in his Arithmetical Books was laudatory about Tunstall: “This book is decidedly the most classical which was ever written on the subject in Latin, both in purity of style and goodness of matter. The author had read every thing on the subject, in every language which he knew … and had spent much time, he says, ad ursi exemplum, in licking what he found into shape. … For plain common sense, well expressed, and learning most visible in the habits it had formed, Tonstall’s book has been rarely surpassed, and never in the subject of which it treats”. As hinted by De Morgan, Tunstall’s work is not original, but a confessed compilation. Tunstall‘s motivation for writing it was a suspicion that that the accounts goldsmiths with whom he was dealing were incorrect; he renewed his study of arithmetic in order to check their figures. His work was the first printed in Great Britain to be devoted wholly to mathematics.

This is the first of three 16th-century editions in De Morgan’s library. De Morgan’s designation of it on the title page as “very rare” has since been disproved: nineteen other copies are recorded in Britain on ESTC, chiefly held in Oxford and Cambridge libraries, with another five in North America. (DeMorgan Library, London)

In Durham Castle, Tunstall constructed a Chapel in 1540. For more info: Tunstall Chapel.